How to Create an APA In-Text Citation

Although many students initially find using APA format challenging, it actually has one of the simplest in-text citation formats of all the various styles. APA uses the author-date method for in-text citation. This format only requires two pieces of information for citations that do not contain direct quotations, but direct quotations need to contain a page number in sources that have page numbers.

For citations that not include direct-quotations, the basic format is:

This can be found at the end of the sentence or immediately following referenced material inside the sentence.

You can also employ signal phrases to introduce the citation. The signal phrase is the author’s name and you follow the name with the year of publication in parenthesis. That basic format would be:

For sources where you are directly quoting material and page numbers are available, you include the page number in the citation.

The basic format is:

There are some general rules for APA in-text citations. Shorter quotations can be included in the body of the paragraph, surrounded by quotation marks, with closing punctuation after the citation information. Longer quotations are defined as quotations that are 40 words or longer, are set apart in a free-standing block of text, which is indented ½ from a new margin. Closing punctuation is at the end of the sentence and additional citation information is found in parenthesis, after the block quotation.

In order to see how citations from different sources would be cited within a research paper or essay, we are including examples from various types of sources. These examples will show you how to cite a source for inclusion in the reference list, as well as showing you how to create an in-text citation from that source.

The most basic format is a single-author book that is available in print. 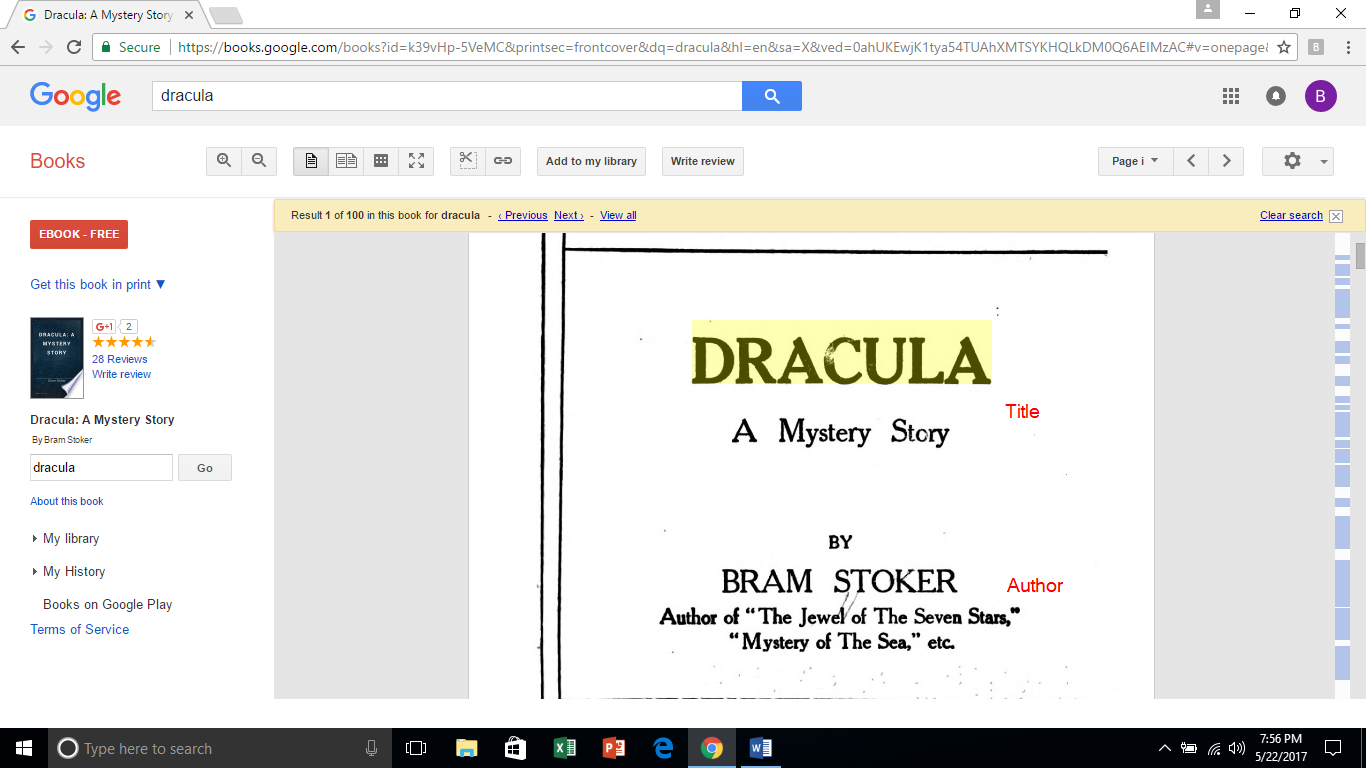 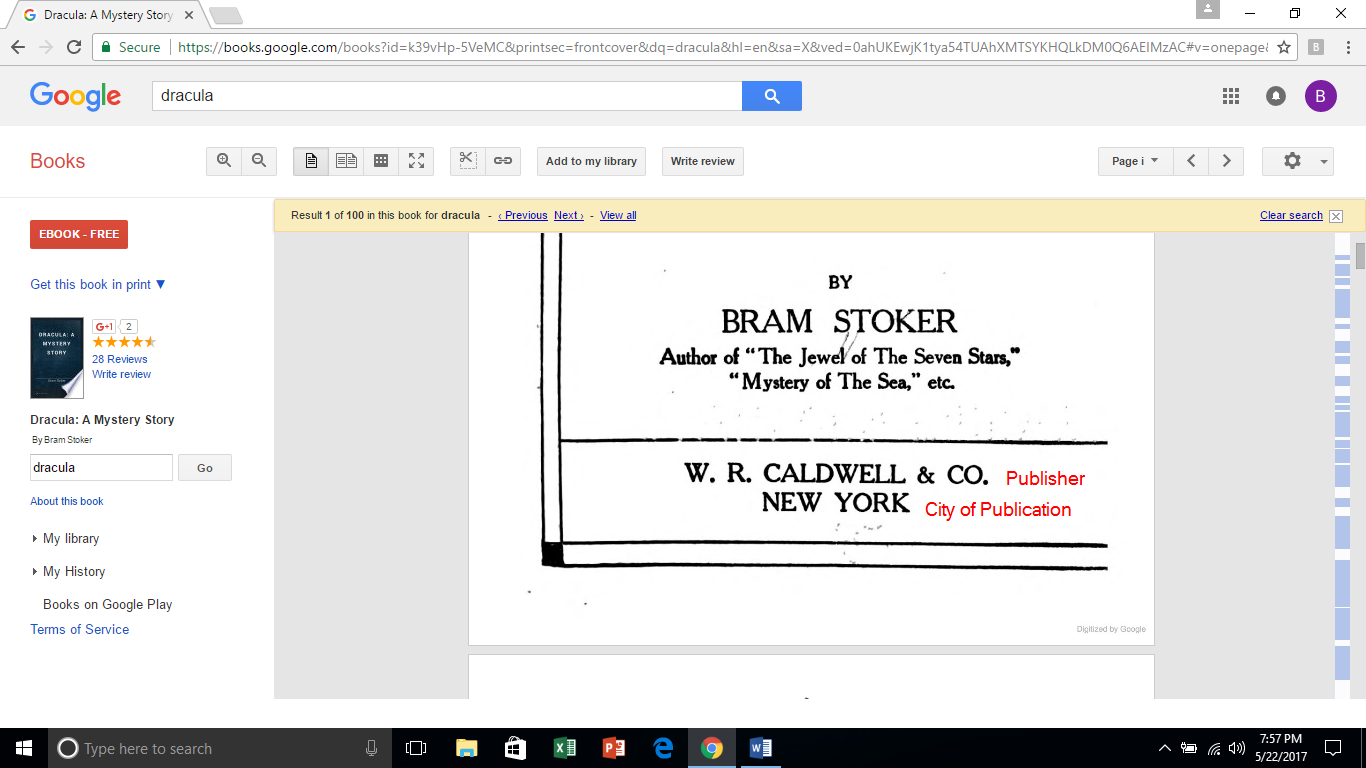 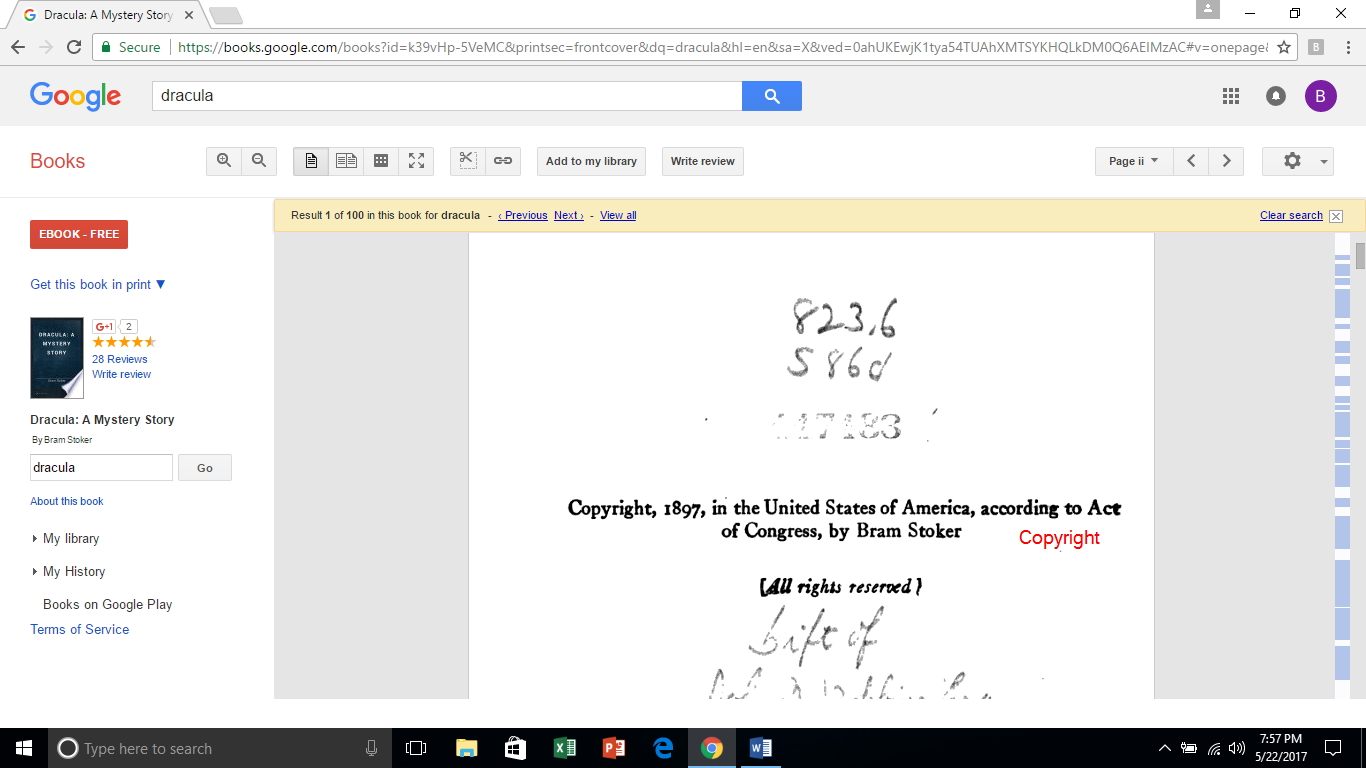 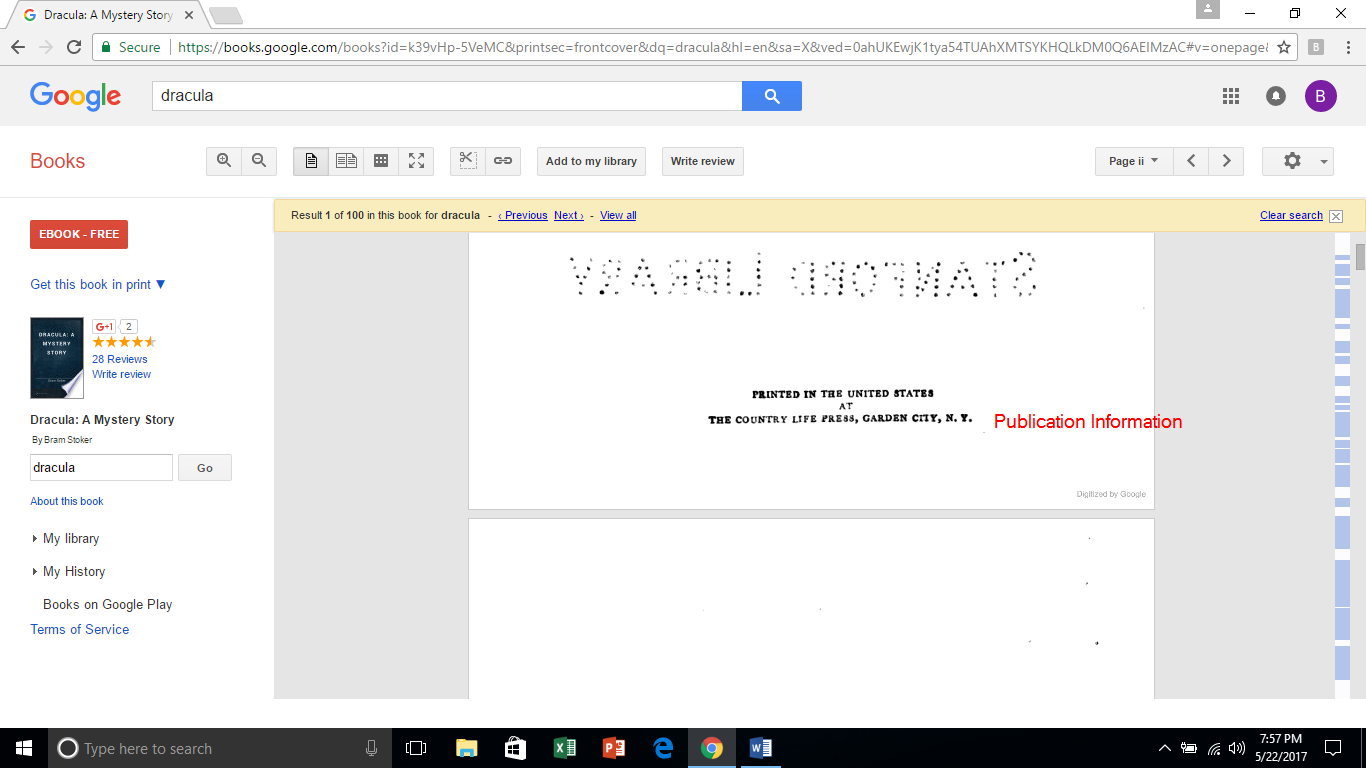 The reference list citation for the book would be:

To indicate that we found the reference on Google Books, we would cite it as:

One of the most interesting aspects of Dracula is how the author builds suspense while still revealing information. “Having had some time at my disposal when in London, I had visited the British Museum and made search among the books and maps in the library regarding Transylvania” (Stoker, 1897, p.1).

At the beginning of Dracula, Stoker (1897) immediately lets the reader know that his protagonist, Jonathan Harker, will be visiting Transylvania:

Having had some time at my disposal when in London, I had visited the British Museum and made search among the books and maps in the library regarding Transylvania; it had struck me that some foreknowledge of the country could hardly fail to have some importance in dealing with a nobleman of that country. I find that the district he named is in the extreme east of the country, just on the borders of three states, Transylvania, Moldavia, and Bukovinia, in the midst of the Carpathian mountains; one of the wildest and least known portions of Europe. (pp.1-2)

When there are multiple authors for a source, each author is mentioned, in the order that they are listed on the book. This rule applies up to 7 authors. After that point, after the sixth author’s name provide ellipses and then conclude with the last author’s name.

For this example, we use Good Omens by Terry Pratchett and Neil Gaiman: 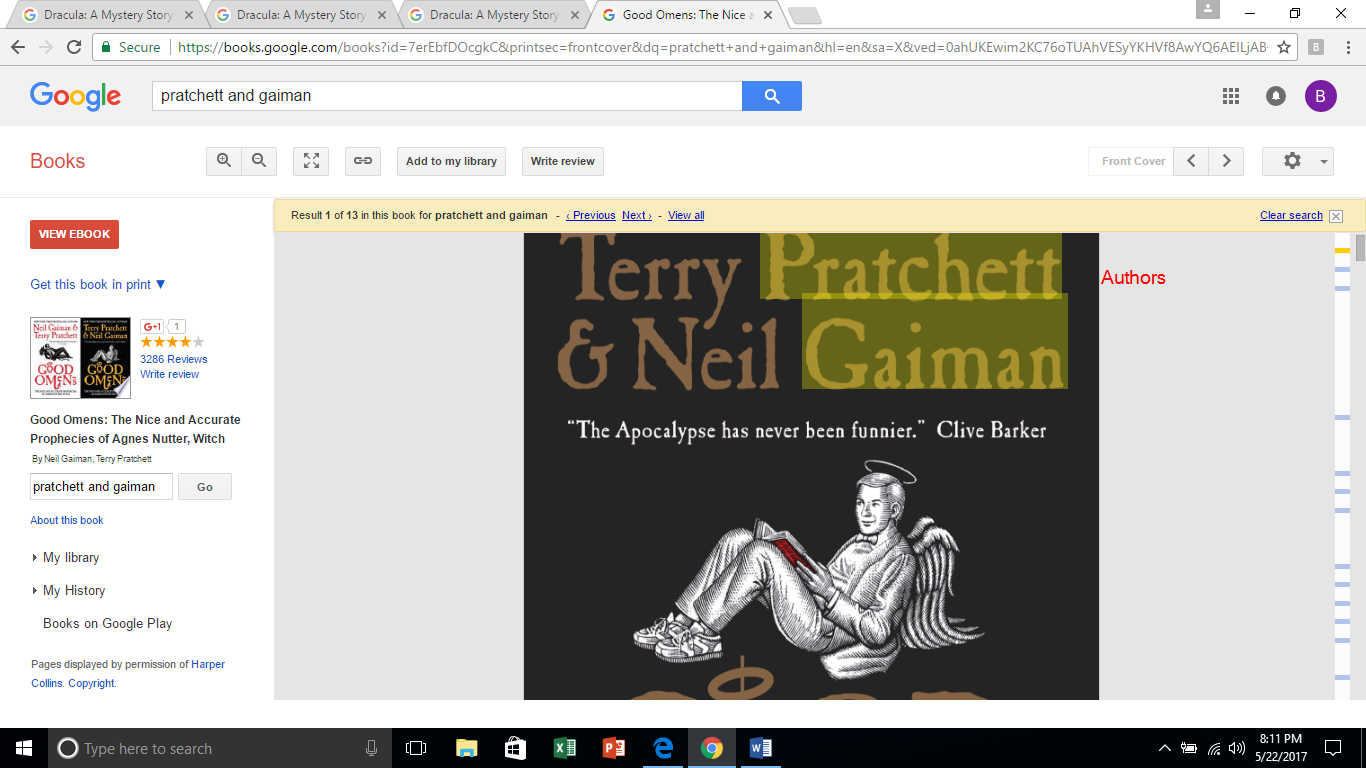 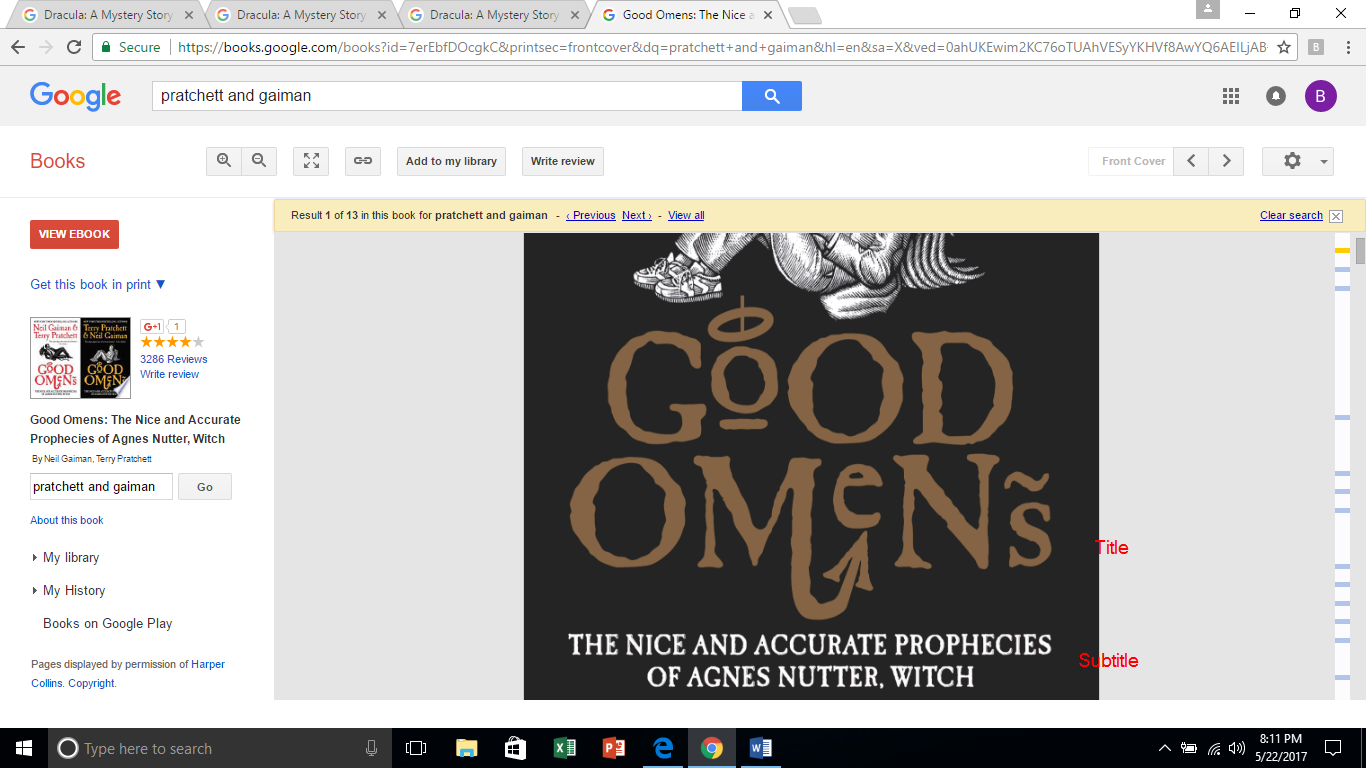 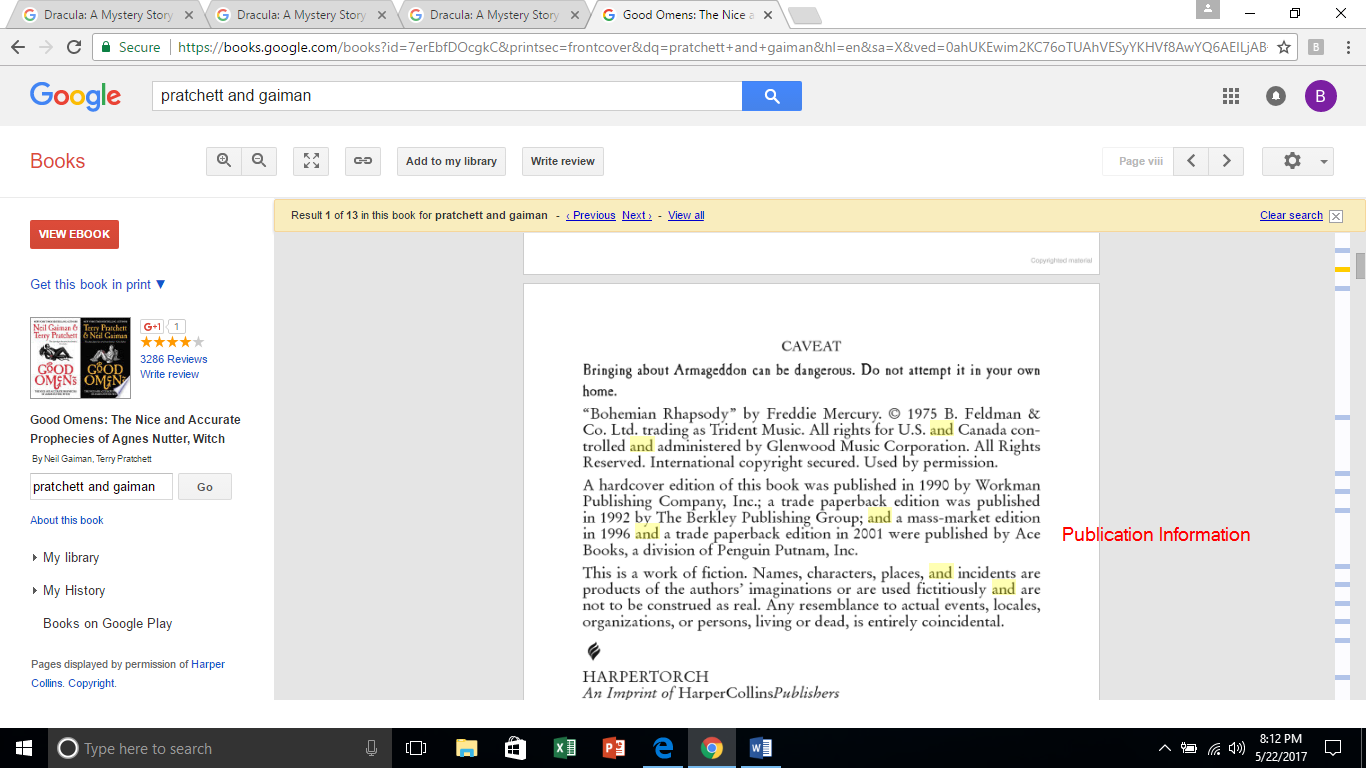 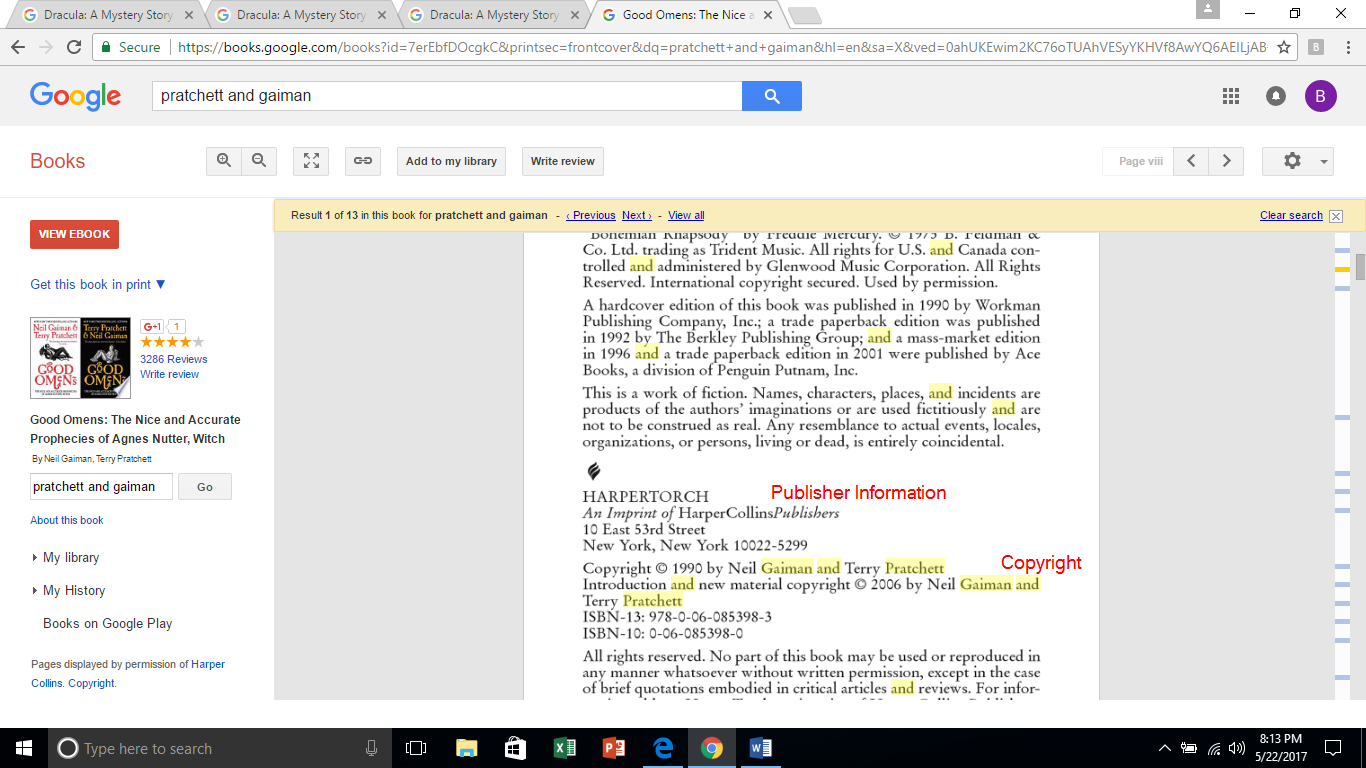 To show that we found it on Google Books, then we cite it like this:

One of the most interesting aspects of Good Omens is how the authors approach the idea of God. For example, Pratchett and Gaiman (2006) describe God as playing games with the universe in a way that suggests more of a cruel indifference than actual malice (p. 14).

Books with No Author

There are two circumstances where you are likely to encounter a book without an author. The first one is where there is actually an author, but instead of being an individual, the author is an organization, corporation, or other group author. You use the same format for them that you do for single author books, but use the name of the organization as the author in both the reference list citation format and in the in-text citation.

Translated or Edited Books with Authors

The basic format for an edited book with an author is:

The basic format for a translated book is:

Our example involves a translator: 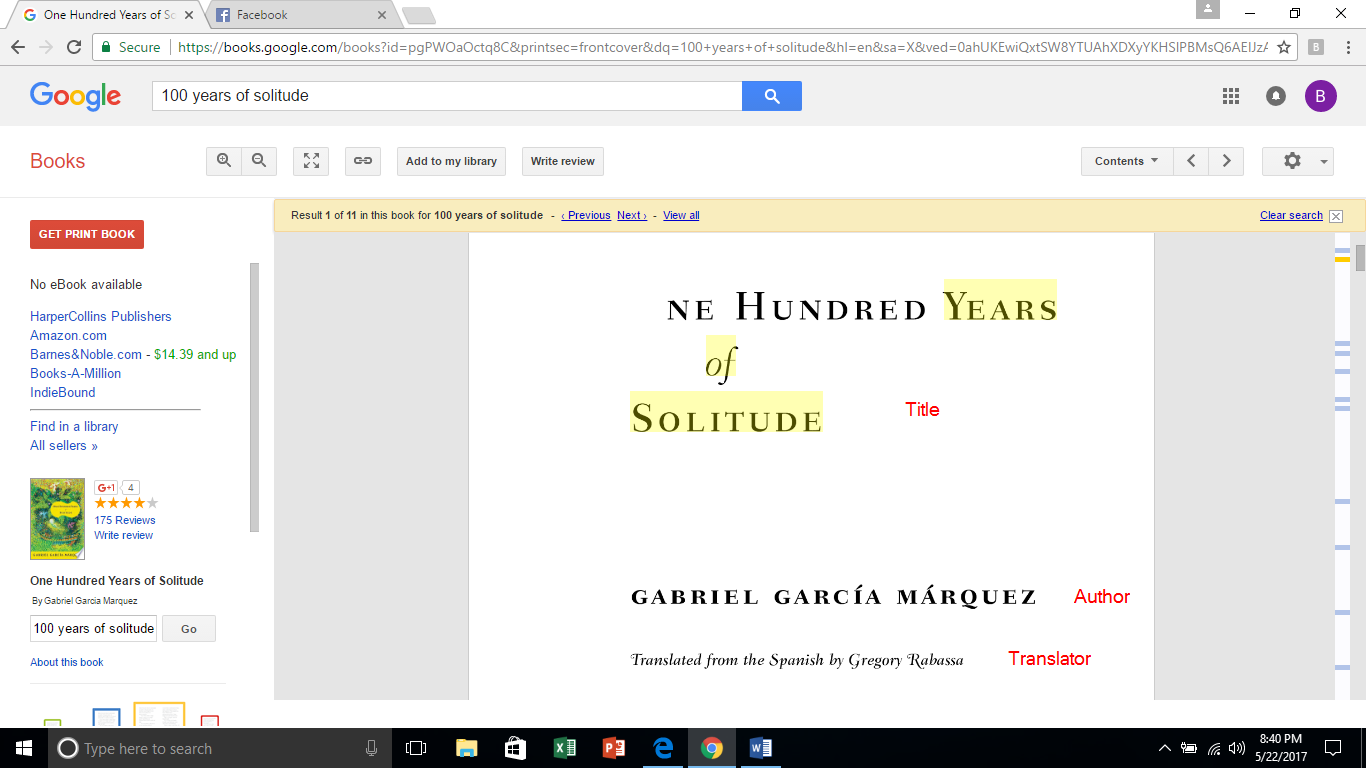 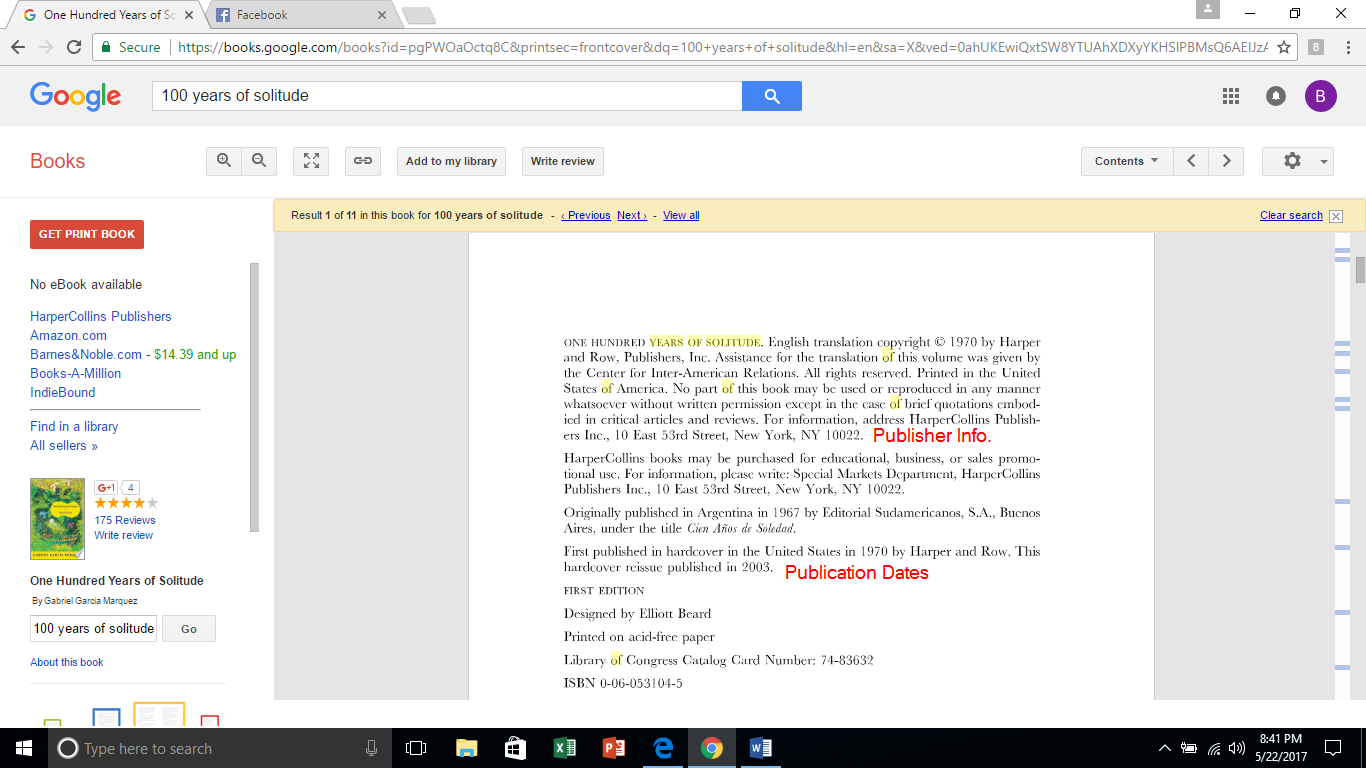 To show it was taken from Google Books:

“On the first contact the bones of the girl seemed to become disjointed with a disorderly crunch like the sound of a box of dominoes” (Marquez, 2003, p.33).

Books accessed through Kindle or Nook have their own citation format:

Author, A. A. (Date of publication). Title of book [Kindle DX version]. Retrieved from Amazon.com

Author, A. A. (Date of publication). Title of book [Nook DX version]. Retrieved from Barnes and Noble

If you are directly citing from an E-book, it will not have page numbers like a normal book and the locations marked in the book do not translate to page numbers in other versions. You will have to use other identifying information, such as the chapter, section, and/or paragraph number. Your citation might then look like this:

To avoid this problem, you can try to avoid directly citing to an E-reader because indirect citations only require the author name and date format.

Generally, websites are easier to use for in-text citations because they do not have page numbers; the URL can take you directly to the page.

While there are some types of information that requires a specialized format, the basic APA website citation format is very simple: 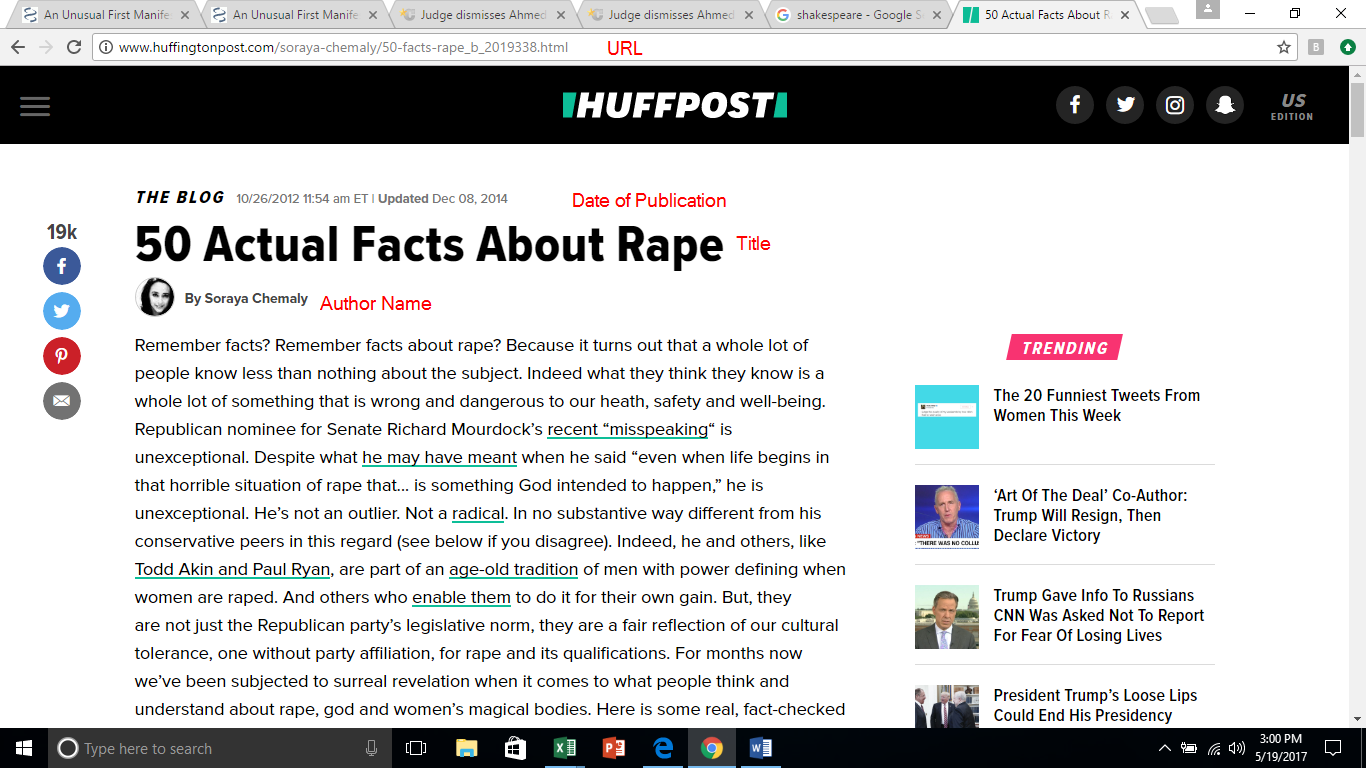 “Remember facts about rape? Because it turns out that a whole lot of people know less than nothing about the subject” (Chemaly, 2014).

According to Chemaly (2014), rape is still a very misunderstood social phenomenon.

In many online encyclopedias, there is no author information. Therefore, the article name takes the place of the author name. The generic format is: 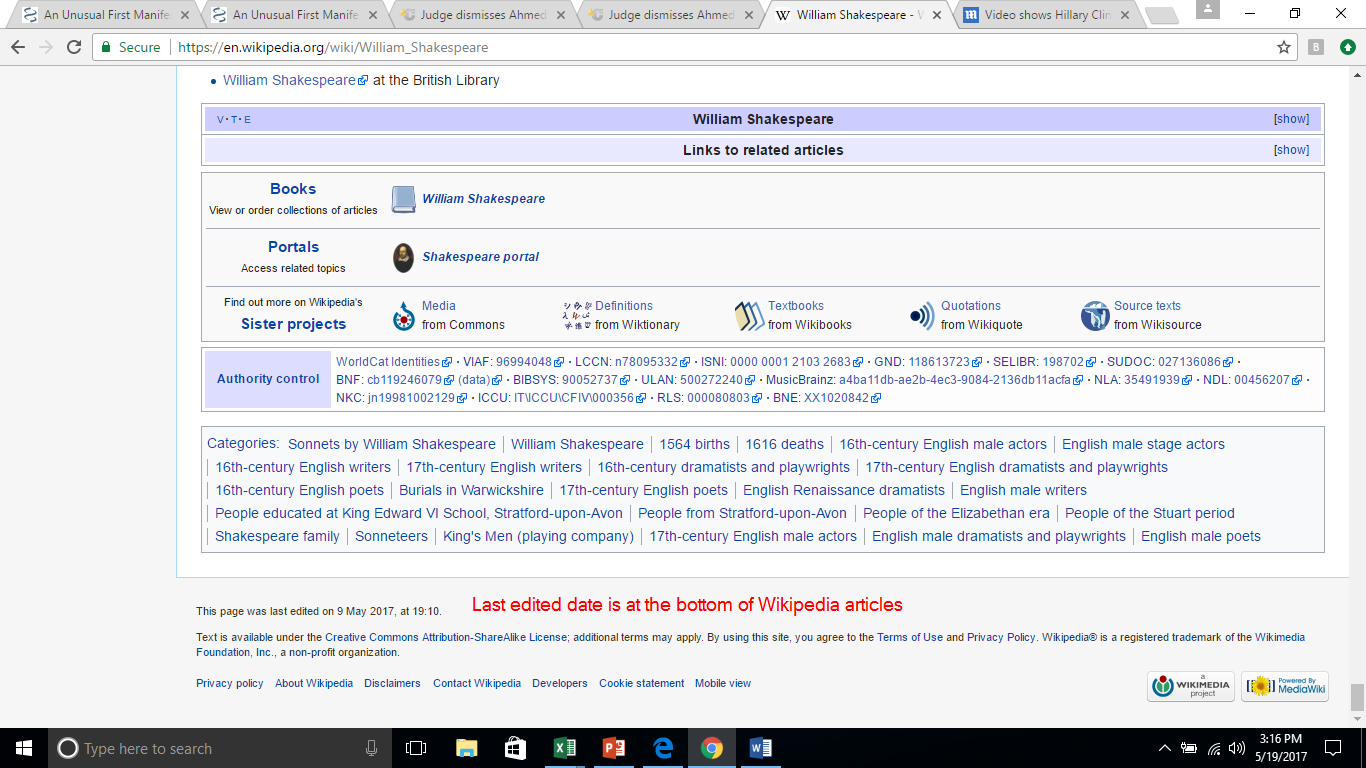 William Shakespeare. (2017, May 9). In Wikipedia. Retrieved from https://en.wikipedia.org/wiki/William_Shakespeare
Direct Quotation

Now, for this example, the name of the article also happens to be the name of a very famous writer, who is probably the subject of any paper that would be quoting an article about him. TO avoid confusion, you could create a faux signal:

According to Wikipedia, Shakespeare’s “plays have been translated into every major living language and are performed more often than those of any other playwright” (“William Shakespeare,” 2017).

Article from an Online Periodical (Magazine or Non-Scholarly Journal) 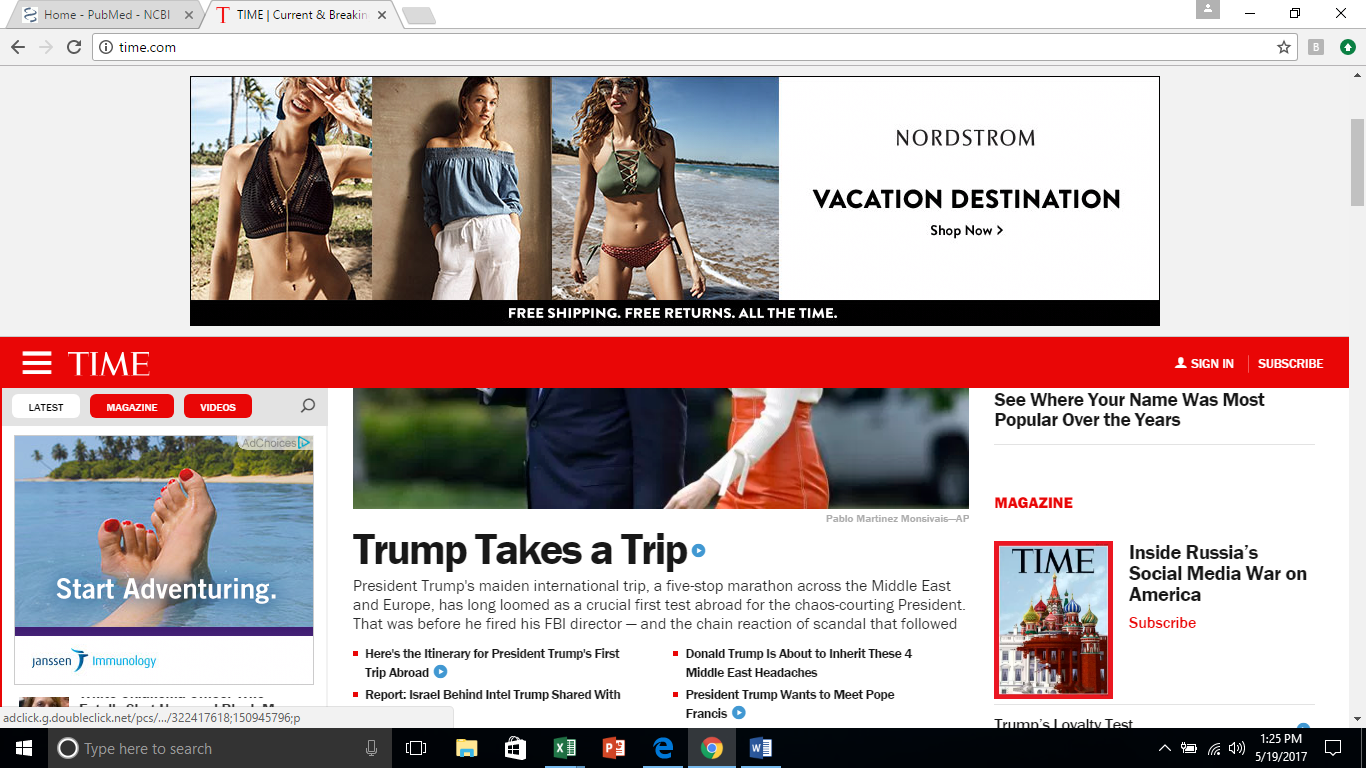 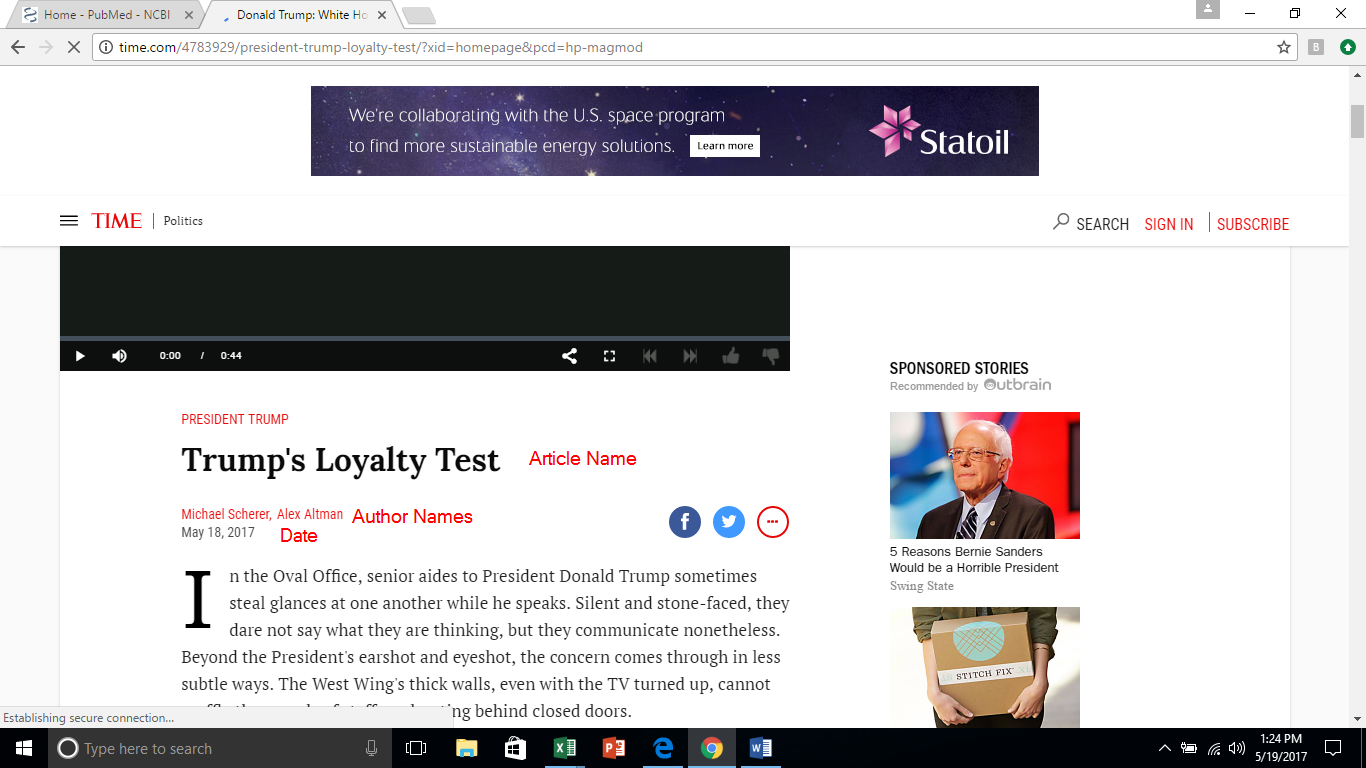 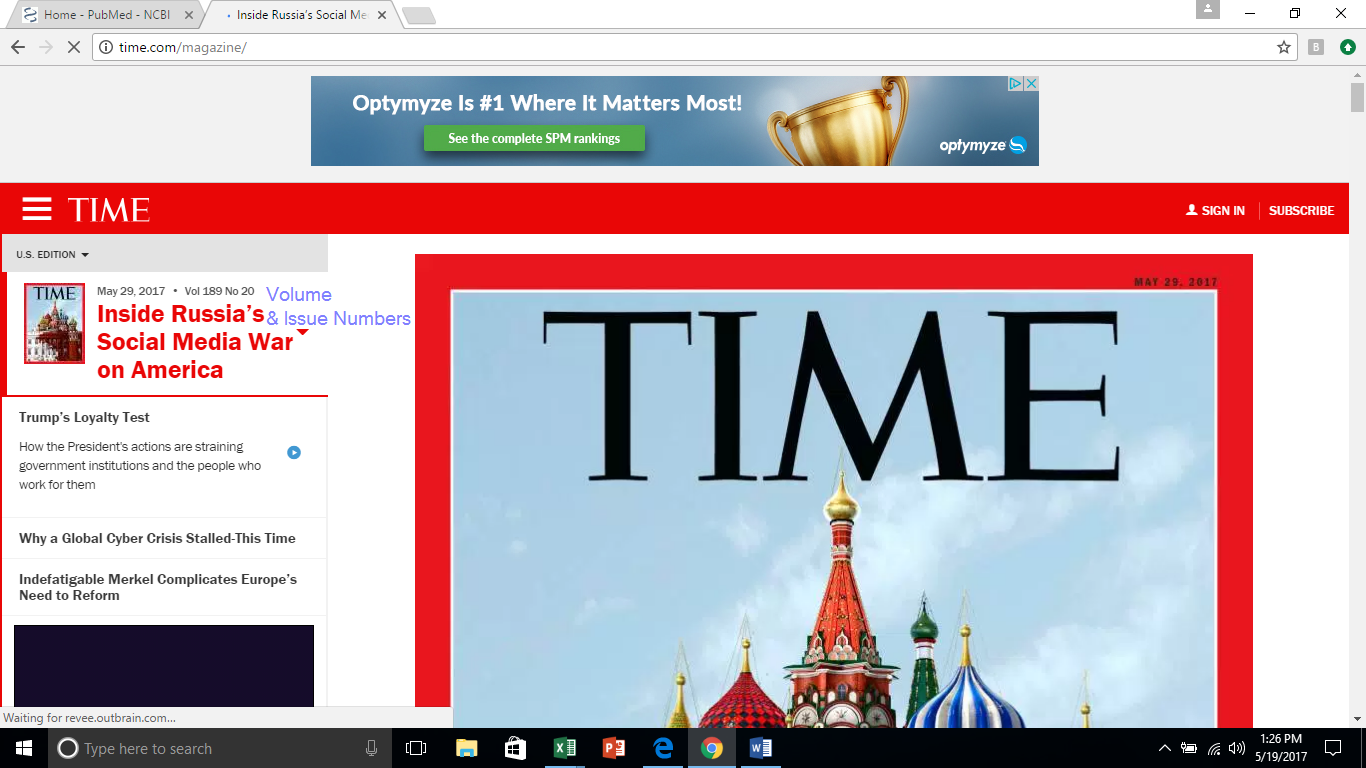 Scherer and Altman point out that “The West Wing’s thick walls, even with the TV turned up, cannot muffle the sounds of staffers shouting behind closed doors” (2017).

Note that there are no page numbers included in this citation because the entire article is on a single page, which is found at the URL listed in the reference list citation.

Article from an Online Scholarly Journal

The basic way of citing an article from an online periodical with an assigned DOI is: 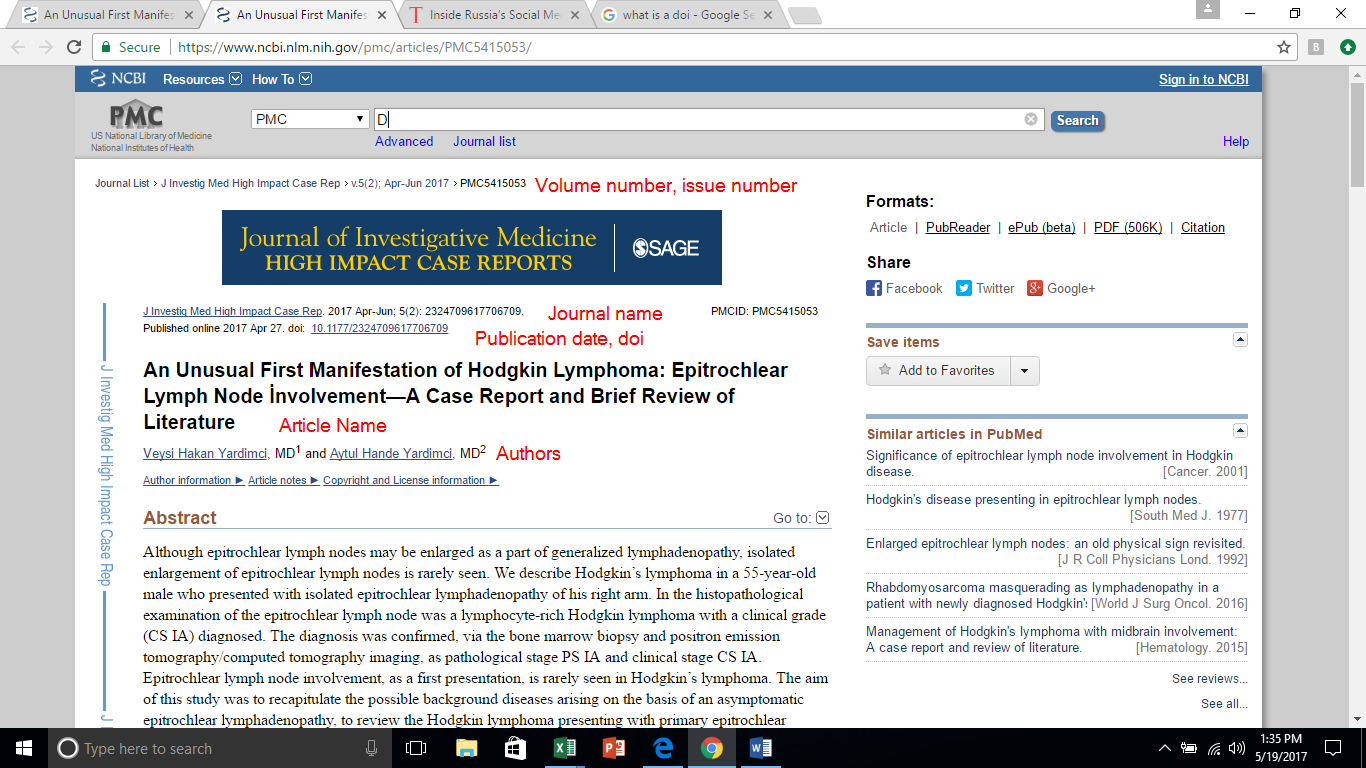 Yardimci & Yardimci noted that “in the histopathological examination of the bone marrow biopsy, no finding in favor of lymphoma was detected” (2017).

This direct citation would have included a page number, but this publication was not yet available in print and had not been paginated.

Scholarly Journal with No DOI

The basic format for an online scholarly journal with no doi is:

Author, A. A., & Author, B. B. (Date of publication). Title of article. Title of Journal, volume number. Retrieved from URL 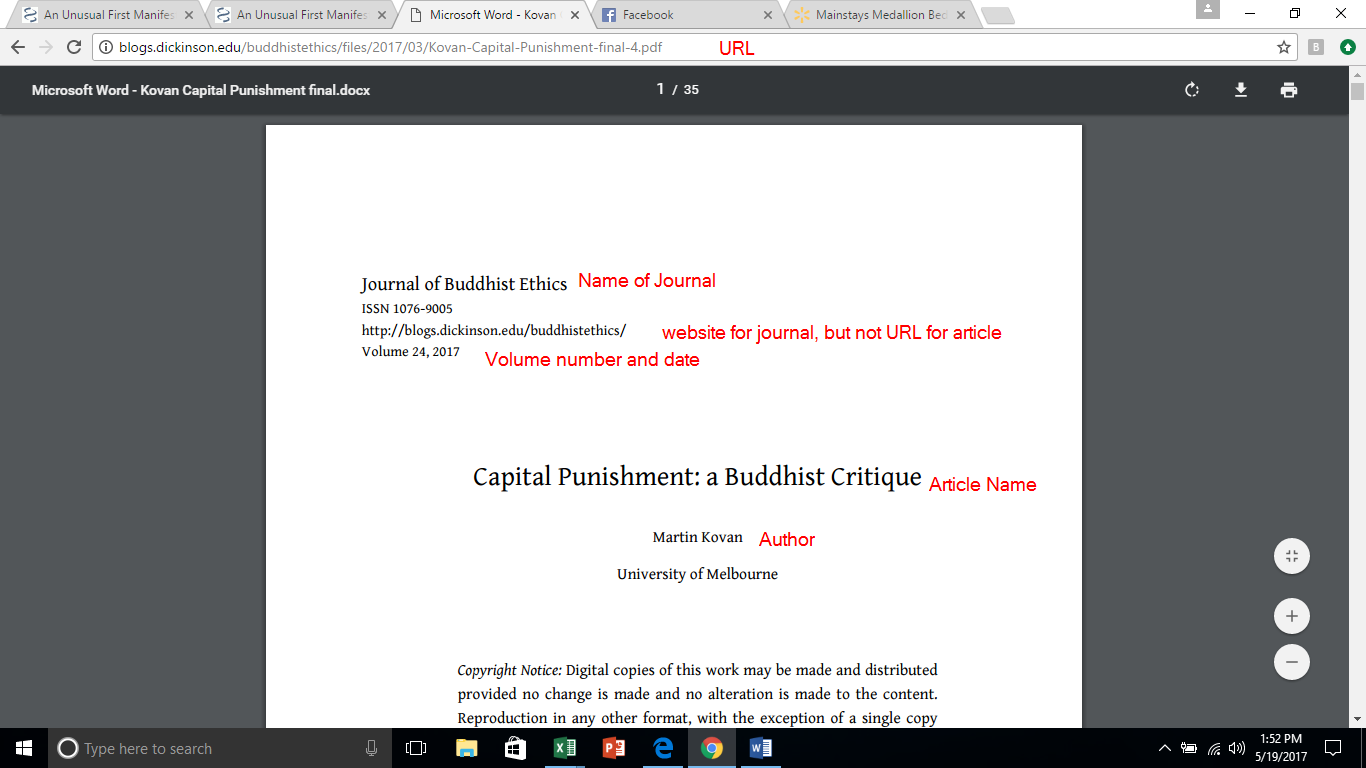 According to Kovan (2017), “Capital punishment is irreversible and so requires a degree and kind of justification not necessary for non-lethal punishment” (p.64).

Of course, Kovan (2017) is not the first commentator to point out that because capital punishment cannot be undone, it requires a different approach than non-lethal punishments.

Newspapers are another popular online resource. The basic citation for a newspaper article is simple: 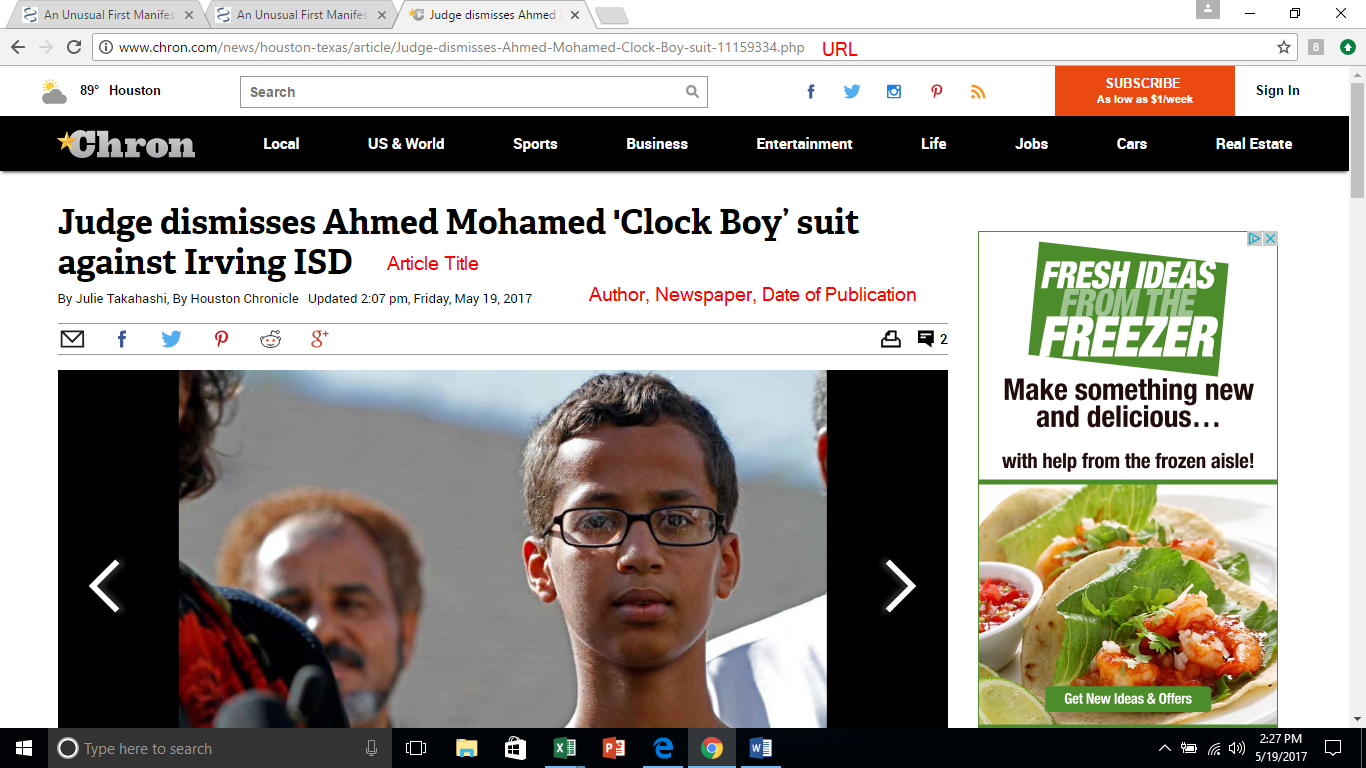 “On Thursday, the U.S. District Judge granted Irving and Irving ISD’s motions to dismiss the Mohamed family’s lawsuit, saying there was no evidence Ahmed faced religious or racial discrimination” (Takahashi, 2017).

Videos available on the internet

While you can find videos in a number of different locations, it is now probably the most common to find videos on the internet using services like YouTube.

The basic format for citing a video available on the internet in APA format is very simple:

In the below example, we look at the citation by YouTube personality Jack Septic Eye:

Popular YouTube personality Jack Septic Eye (2017) opens up his video with a consistent phrase and a recap of what happened on his last episode.

You can also create a direct citation from a YouTube video: 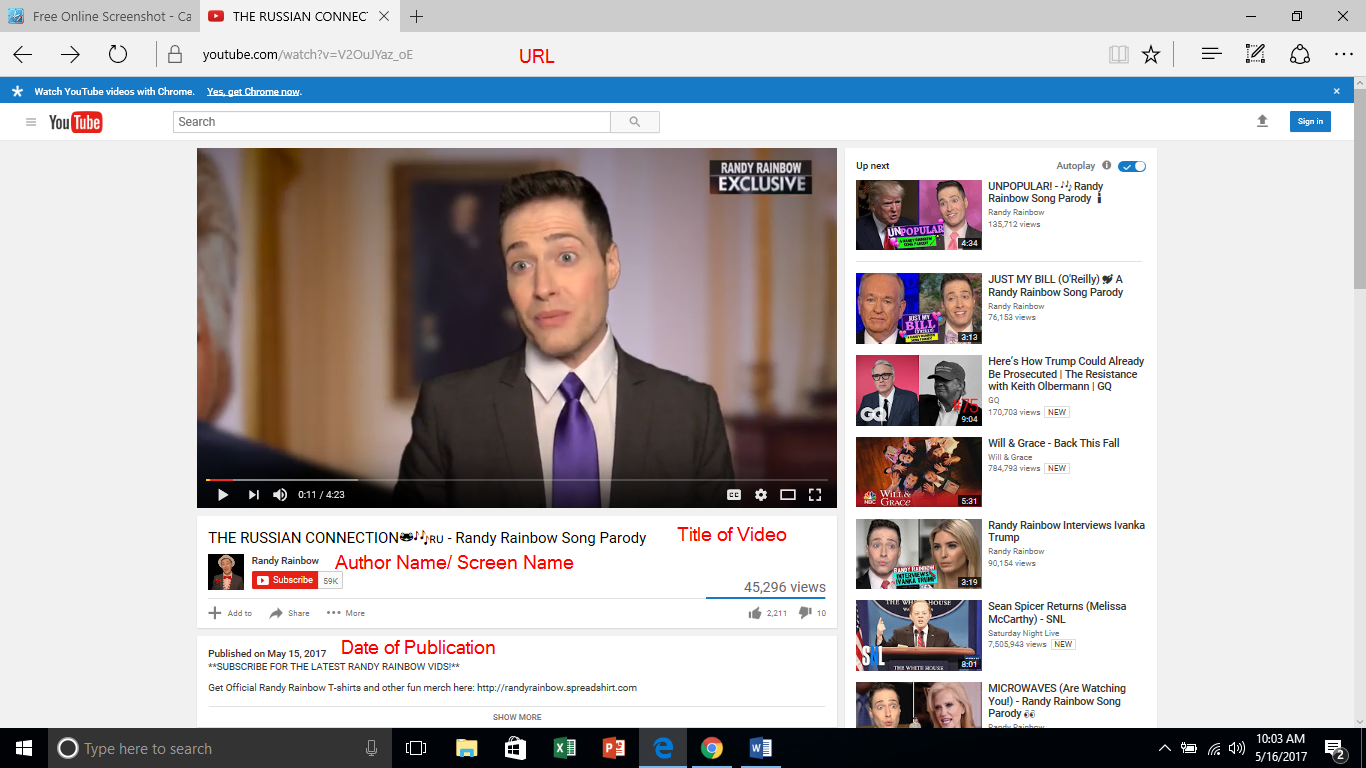 Randy Rainbow uses political satire to make a point, singing, “Someday we’ll find it, the Russia connection” (2017), to the tune of The Rainbow Connection song made popular by the Muppets.

Motion pictures are relatively easy to cite. The basic reference list citation format for a motion picture or video is:

In the movie, The Princess Bride, the Dread Pirate Roberts reveals himself to be the farm boy Wesley, when Buttercup pushes him down a hill and he cries out, “As you wish” as he tumbles down the hillside (Lear, 1987).

Wesley manages to keep his identity secret, but reveals himself to Buttercup when he cries out his catchphrase after she pushes him down a hill (Lear, 1987).

As the above examples make clear, the author-date in-text citation format is extremely simple and can be used with virtually any type of source, with very little adaptation. In sources where additional location information, such as page numbers, are readily available, those are included in direct quotations to make them easier for the reader to find. In sources where additional location information is either not easy to find or would not make finding the source information any easier, you can simply use the author date format. If you have any questions about how to use the author-date format for in-text APA citations, you can visit our Student Questions format. If you need additional help on how to form APA reference list citations, please visit our APA citation tutorials.

How to Cite a Case Study

Students are often puzzled about the proper citation format for...

How to Write an Amazing Thesis Statement

How to Complete an APA Style Paper

What is APA?  Most of us begin our academic writing careers using MLA style,...

How to Write an APA Title Page

If you are writing a paper in APA format, then you may be wondering how to...

How to Cite Your Essay in MLA Format

What is MLA? MLA stands for the Modern Language Association, an organization...